On the 26th of July 1999 at 16:30, the final piece of the financial magic which has created Element 14 Inc as a buy out from Acorn Group happened - a phone call from Jason on Stan's hated Bosch mobile confirmed that the money had been transferred to Morgan Stanley Dean Witter and it was champagne time!

The group shot outside in Quy Mill, with the clouds clearing just at the right instant: 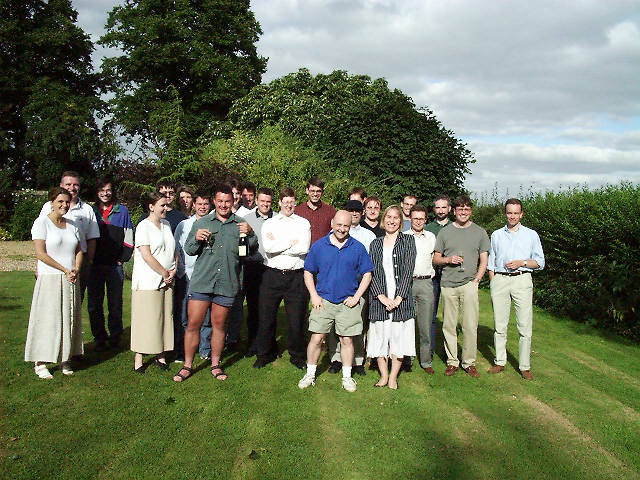 A pretty good turnout. Well, Chris, Mark, Neil, Neil and Trevor didn't turn up at all (flimsy excuses like being on holiday or having some work to do) and Andy, Kamiar, Richard, Sean and Zahid had already left with feeble explanations like having to get home. So that's just Helen, Stan, Alex, Sam, Andrew, Lyn, Dan, Rich, Chris, Richard, Peter, John, Darren, Tim, Ed, Adrian (nearly hidden behind Ed's cap), Nick, Sophie, Piers, Peter, Dave, Rob, Simon. Hmmm... must be just about the biggest silicon start up EVER!