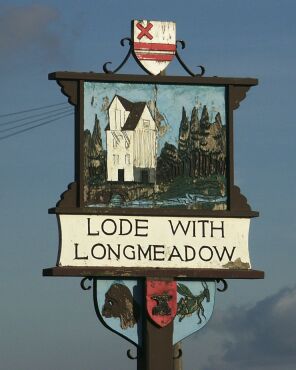 Lode is a small village NE of Cambridge (on the B1102 ,"Quy Road", 52 degrees, 20' N, 15' E). It is named after the Bottisham Lode (stream) which runs North out of the village. Anglesey Abbey, a National Trust property is on the SW of the village. Its quiet and quite photogenic. This site started when I wanted to describe Lode to my American e-mail friend, Lynn Conway - the story of building the site became an article in the parish newsletter "Lode Star". The site has been read from far away in America, reminding people who have left Lode what its like - and used by Harriet next door for a school project!

The 9th July 2006 opening of the children's playground.

The 24th June 2000 Lode Fun Day was the culmination of years of planning and months of work for the organisers, aiming at building community spirit. We came along for the Fun Day!

Pictures of the 3rd July 1999 fete are here: Lode Fete

A walk out of Lode to the north is here

A walk out of Lode to the south is here

My favourite picture here is of Lode Water Mill: the Mill can be visited via Anglesey Abbey, or you can just walk around the fen to see it. Or explore this 240 megapixel image of it! Other pictures which don't quite fit anywhere else...